Not only can Tiff drive cars very fast whilst being very sideways but he's got a lot of stories to tell having made it all the way to the top of the motorsport ladder - Formula 1.

Written with honesty and humour, Tiff Gear is the engaging story of Tiff Needell's life around cars and motor racing. For over 25 years Tiff has been a well-known television personality, first on "Top Gear" - where he worked alongside Jeremy Clarkson - and then on Channel Five's "Fifth Gear". Besides this, Tiff had an incredibly varied and long motor racing career that saw him reach the heights of a Grand Prix drive at Monaco and escape unharmed from a horrific 200mph crash at Le Mans. He tells his unique story with pace and style in a book that all motorsport fans will relish. 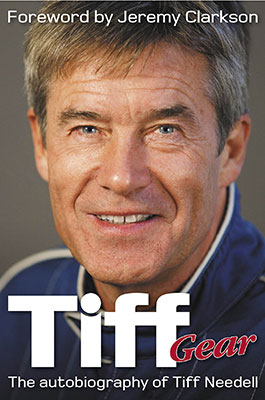 We're offering Tiff Gear with a discount on the retail price and Tiff will write a personalised message inside the cover. Making this the perfect present for any motorsport fan.

Two version of the book are available:

Looking for something even more special? Check out the Tiff Needell BMW M4 passenger experience and feel what its like from inside the car whilst Tiff takes a new BMW M4 to the limit at Thruxton.

Star of Top Gear and Fifth Gear, F1 Driver and Le Mans racer Tiff Needell at the wheel of a brand new BMW M4 around the sweeping curves at Thruxton. Hold on tight, this is a white knuckle ride you'll never forget