Thruxton Circuit will step back in time and reverberate to the sound of the finest historic and classic motor racing in the country for the annual Thruxton Historic.

Now a regular on the events schedule since debuting back in 2018 as part of the venues 50th Anniversary celebrations, the two-day meeting brings legendary machines and racers to the fastest race circuit in the UK for an adrenaline rush like no other.

Away from the racing, there will be a host of family friendly activities including car displays, demonstrations, circuit rides, live entertainment, camping, trade village and much more.

Land Rover Legends is the ultimate show for Land Rover enthusiasts, showcasing the very best examples of the marque, including several rare and unusual vehicles from the Dunsfold Collection, a founding partner of the event. The 2021 edition includes unique feature displays, the leading Land Rover clubs, the National Land Rover Awards, an exclusive Land Rover parade on the race circuit, specialist exhibitors and traders –and an unmatched atmosphere from the Thruxton Historic race meeting.

Find out more about Land Rover Legends and purchase tickets

all tickets for this race meeting are listed below

Children 15 and under accompanied by an adult (max 5 children per responsible adult) are admitted to the circuit free of charge.

Children 5 and under will be permitted to sit on a parent/guardian lap and therefore admitted free of charge. Where pre-allocated seats are issued then all seats taken must be paid for, irrespective of age.

We are offering a great Car Club deal. Registering will give your club a presence at the event with free dedicated display parking, and your club members advance tickets at 50% off the on the gate price. If you represent a car club and are interested in your club attending, click here

Should we be unable to have spectators at a race meeting in 2021. Customers will have the option of a full refund or to transfer their tickets.

We've put measures in place to ensure Thruxton operates in a Covid secure environment, ensuring spectators are kept safe whilst enjoying the racing action on the track. We'll keep our website updated with the latest information and guidance and will communicate with all ticket holders regularly.

Attend on Saturday of this truly special historic race meeting.

Attend on Sunday of this truly special historic race meeting.

Attend both days of The Thruxton Historic.

ONLY AVAILABLE IN ADVANCE.

Grandstand seat for Saturday. Get the best view for all the action on track.

Does not include entry to circuit.

Grandstand seat for Sunday 13 June. Get the best view of all the action on track.

Attend the Saturday of the Thruxton Historic.

Attend Sunday of the Thruxton Historic.

Attend both days of the Thruxton Historic.

There is no news for this event presently

Thruxton circuit is the fastest in the country with its legendary high-speed corners and a reputation as a real drivers circuit. It is also one of the longest in the UK at 2.4 miles per lap 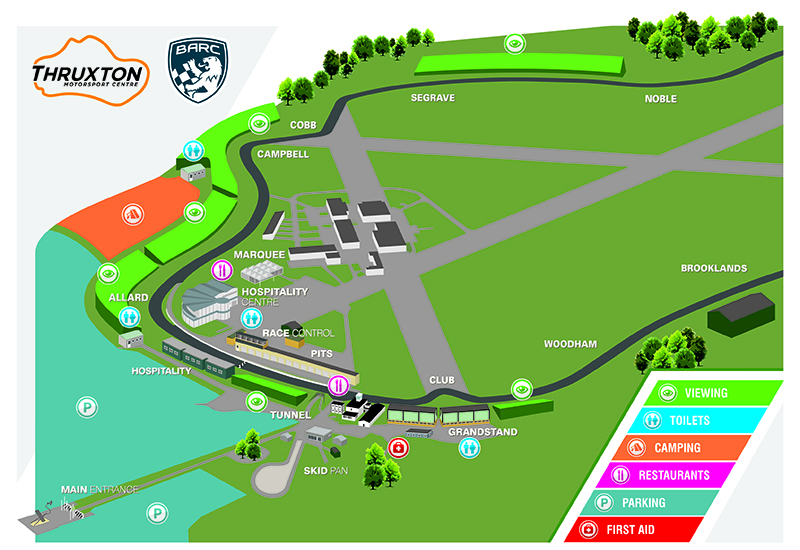 On race-days, a radio commentary is provided by 'Radio Thruxton' available on 87.7FM. Earpiece radios are available to purchase on-site.

The Thruxton Centre, located in the paddock, will be open to competitors, officials and marshals only for food and drink.

We've invested in clear signage throughout the venue to reinforce social distancing guidance and personal hygiene measures. Hand sanitiser stations have been installed at key points around the venue.

Where are my tickets?

Tickets will be sent near the event date. All tickets are posted first class unless you have requested special delivery. If you have ordered your tickets and you are concerned that you have not received them please call the ticket office on 01264 882200 option 1, and we will try to help trace your order.

When will my tickets be dispatched?

All tickets are sent well in advance of the race meeting to ensure you receive them in time. If your tickets have not been delivered, please contact us on 01264 882200 (option 1).

Can I turn up and purchase tickets on the day?

Currently yes. However, if government guidance changes, we may have to request all tickets are purchased in advance. If this is the case, we'll communicate on our website, email database and social media channels.

What if my tickets don't arrive in time?

In the rare event that your tickets have not arrived in time, you will need to purchase them at the gate, we will then refund you after the event. All you need to do is return the on the day ticket and your original advance tickets to the ticket office.

Can I collect my tickets on arrival at the circuit?

Unfortunately, advance tickets cannot be collected on the day of the event due to the multiple number of entrances into the venue.

Is the grandstand included in my ticket?

Grandstand seating is not included in the price of the admission ticket. Grandstand seats can be purchased separately in advance and on the day of the event - subject to availability.

Children 5 and under will be permitted to sit on a parent/guardian lap and therefore admitted free of charge. Where pre-allocated seats are issued then all seats taken must be paid for, irrespective of age.

Can I pre-book camping and what time are we able to arrive?

We intend to have public camping for this race meeting but it is dependent on government guidance and any restrictions in place at the time of the event. We’ll communicate this nearer the event and will ensure all advance ticket holders are contacted first.

Do you offer any concessions?

Children aged 12 and under are admitted free of charge to the Circuit and Paddock (max 5 children per responsible adult). A teen ticket is available for 13 - 15-year-olds.

If you are a Member of the BARC you are able to purchase discounted tickets on production of your membership card.

Carers of our disabled guests may be entitled to free admission at Thruxton Race Meetings, however, this must be arranged prior to the event date. Anyone turning up on the day will not be able to obtain a free carer ticket. More information available here

How much does parking cost?

Parking is free of charge.

What time do the gates open?

The circuit is open from 8am.

What time does it finish?

The last race/event will finish no later than 6:30pm.

Do I need to purchase a ticket for my children?

BTCC & BSB Race Meetings - Children 13-15 years old must hold a teen ticket. Children 12 and under accompanied by an adult (max 5 children per responsible adult) are admitted to the circuit and paddock (providing the responsible adult is still accompanying them) free of charge.

All other race meetings, Children 15 and under accompanied by an adult (max 5 children per responsible adult) are admitted to the circuit and paddock (providing the responsible adult is still accompanying them) free of charge.

How do I get media accreditation?

Please contact our press officer Trevor Swettenham on 01264 882206 or tswettenham@barc.net

Where is the disabled viewing area?

We have a designated banking area for Blue Badge holders, which is accessible via Gate 4. This is a raised bank for you to park your car, providing a view over the 'Complex' section of the circuit. There is also disabled parking at the top of car park A. Ask a member of the security staff to direct you if you're unsure. All passengers/driver must have relevant admission tickets.

Do you have a cash machine?

No, but we do offer a cash-back facility in the restaurant (minimum spend of £5.00)

Do you have an area for lost property?

If you have lost any of your property please report it as soon as you can to the BARC office which is located under the Members grandstand (01264 882200 option 6), this is where any lost property is handed in. In the event that a child is found to be lost within the circuit, they will be taken to the BARC Office where CRB checked staff will care for them until they are reunited with their parent/guardian.

Where is the first aid centre?

We have St Johns Ambulance on site in various locations and we also have a manned medical centre in the paddock, any member of staff or security will be able to assist you.

Am I allowed to bring my dog/pet to the circuit?

Thruxton is an active airfield and race circuit and as such there is a strict no dogs/pets policy on site, except for registered guide dogs who are allowed, providing they are kept on a lead at all times and are easily identifiable as guide dogs. Any dogs/pets found to be locked in a vehicle will be removed.

Do you have baby changing facilities?

There are baby changing facilities in the paddock toilets, Thruxton Centre, the toilets at Allard and Chicane corners.

What are you doing to keep visitors save?

We will be taking extensive measures to ensure the health and wellbeing of our customers and colleagues throughout the venue by implementing strict social distancing and other preventative measures to ensure we can operate safely. This will include clear signage and enhanced cleaning procedures.

In addition to this, we have sourced and invested in hand sanitiser stations, anti-viral surface cleaning products and protective safety screens where appropriate.

We do however rely heavily on the cooperation of our visitors to comply with the latest government guidance and best practice to ensuring a safe venue for all.

In line with Government guidance, if you are displaying any symptoms whatsoever (new/persistent/continuous cough, fever and loss or change to your sense of smell/taste) you should not attend Thruxton under any circumstances.

Do I need to do anything before arrival at Thruxton?

Ticket holders are advised to check our website and social media pages for the latest information.

If you are displaying any symptoms whatsoever (new/persistent/continuous cough, fever and loss or change to your sense of smell/taste) you should not attend Thruxton under any circumstances.

Will I notice anything different whilst at Thruxton?

We've taken extensive measures to ensure the health and wellbeing of spectators whilst at Thruxton.

We've implemented strict social distancing and other preventative measures throughout the entire venue to ensure we can operate safely. This includes clear signage and enhanced cleaning procedures.

Please ensure that the latest social distancing guidance is followed at all times. We have plenty of space on the spectator banks for all visitors to maintain a safe distance.